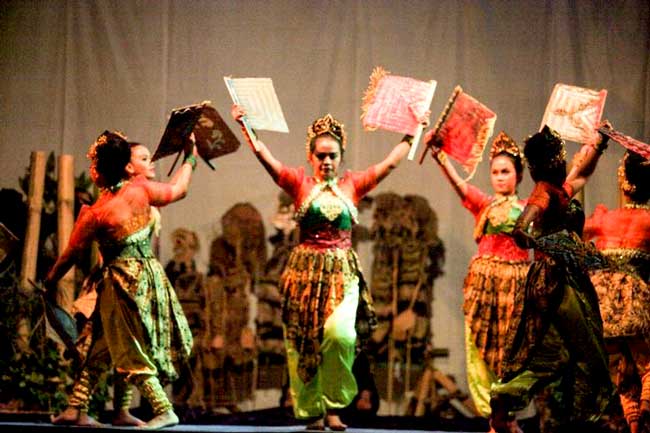 It is true tourists may think about natural attractions when they visit Bogor City. However, aside from waterfalls and other natural tourist sites, people can find various allures of the city including the traditional dances. As for the example, there is Wayang Hihid Dance. In terms of name, “Hihid” means bamboo fans. The founder was Mr. Ade Suarsa in 2009, so it is considered a new dance and has become a new signature dance of Bogor City. The performance symbolizes both modesty and beauty, actually. No wonder, it may entertain everyone who visits Bogor during the holiday.

The Nuance
As the name suggests, the dancers may use bamboo fans as the main ornaments. These fans look beautiful due to the painting ornaments as well. Not to mention they wear beautiful Batik fabric and unique head accessories. As for the dancers, they consist of 6 females who perform both energetic and soothing movements. For the information, these dancers perform it on an open field during the day. The good thing is that tourists are allowed to take pictures during the performance freely, as long as they don’t disturb the dancers.

Watching Wayang Hihid Traditional Dance
First, it is important to know the function of Wayang Hihid Traditional Dance. In a nutshell, the locals take advantage of this traditional dance as an entertainment and a symbol of modesty. It is just similar to “Hihid” (bamboo fans), which may soothe people during an uncomfortable situation. These days, though, the dance helps the locals to lure tourists and outsiders to come to Bogor. No wonder, it becomes more popular and is able to compete with other traditional dances of the region like Rampak Gendang and Ketuk Tilu.

In a nutshell, Wayang Hihid is a dance group and performed by female dancers. Here is the thing. In the beginning, a “Dalang” or puppeteer would read “Kakawen” or an opening of the show. Then, a loud rhythm starts and the female dancers enter the field and show some energetic and beautiful moves to the audience. In the midst of the performance, 2 male dancers enter the field to spice up the show. One of them is called Jangkrik Gombong who represents a good person. Another is called Jongjrong Maruta who represents an evil.

As for tourists, they can take advantage of Wayang Hihid traditional dance as the new entertainment during a visit to Bogor City. Also, they are allowed to carry a camera and take good pictures while watching the performance. It is even possible to learn the dance from the locals if they are able to negotiate with them.

How to Get There
For those coming from Jakarta City, they can directly go to Bogor City and head to the nearby village to watch the dance. The thing is that they should know the schedule of the performance first, before heading to Bogor. The distance between Jakarta and Bogor City is 59.9 km, so the trip may take about 1 hour and 39 minutes. Have no worries. It gets faster if they take Jagorawi Freeway to get to the destination.