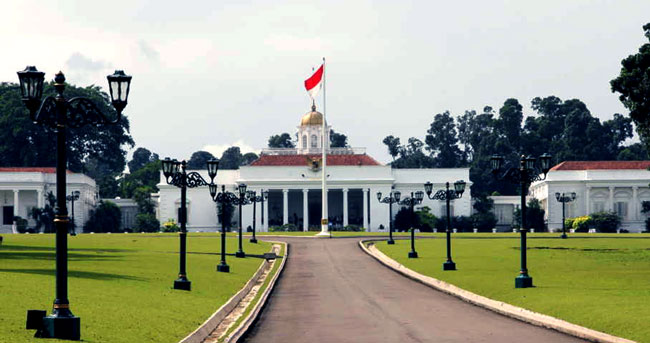 In the northwestern corner of the Botanical Gardens, the summer palace of the president was formerly the opulent official residence of Dutch governors general from 1870 to 1942. This is it, Bogor Palace (Indonesian: Istana Bogor) becomes a great extra when it comes to a vacation in Indonesia. The location is in Paledang Village belongs to Central Bogor Sub-District. During the colonial era, the name was Sans Souci or Buitenzorg. It has the meaning of “without worries”, actually. In terms of function, it becomes one of the six presidential palaces and one of the most interesting vacation destinations in Bogor City. Visitors are interested in various aspects of the palace including the culture, history, and the presence of Nepal’s deer.

The Nuance
Bogor Palace was built in 1744. In the past, it became a vacation home for the builder (Jenderal Gustaaf Willem Baron Van Imhoff). The inspiration came from a nearby peaceful village and the architecture took an example from England’s Blehheim Palace. However, as the time went by, the building underwent several changes and functions. It turned into a palace and got an improvement in terms of size. Today, it has the total area of 14,892 meters per square and it has the yard with the size of 28.4 hectares.

Exploring Bogor Palace
The locals have been visiting Bogor Palace regularly, especially during weekends. Most of them are families with kids who want to explore the site and enjoy a recreation together. Well, the most famous activity is to feed the deer living in the yard of this palace. Have no worries. Visitors don’t have to carry animal feeds as they can buy these from local farmers who stand by on site. These include carrots, actually. Also, do not forget to take pictures of those animals before going home.

Even though there is a limit in exploring Bogor Palace, tourists can come to the site in a group as long as they have obtained the permission from the official beforehand. So, what is inside? Numerous artworks reside in the palace so tourists can take pictures of these beautiful items during the visit. The most famous one is the skull of Thailand’s tiger. The palace also stores tons paintings and statues! Not to mention tourists can find rare Bohemian and Persian carpets and crystals.

For those who want to explore Bogor Palace thoroughly, they should consider hiring a tour guide though. He may help everyone to get around the site efficiently, after all. The main building has the function as the place to hold important events and ceremonies. In the left wing, 6 bedrooms are used for the important guests. In the right wing, 4 rooms are available for the head of nations who visit Bogor. There is even a library and other important rooms inside, actually.

How to Get There
A distance between Jakarta City and Bogor Palace is 54.5 km. That means tourists may spend a trip for about 52 minutes. Their prime destination is indeed Bogor City. Next, they should head to Central Bogor Sub-District and head to Paledang Village where the palace resides. As for a faster trip, it is recommended to take Jagorawi Freeway.