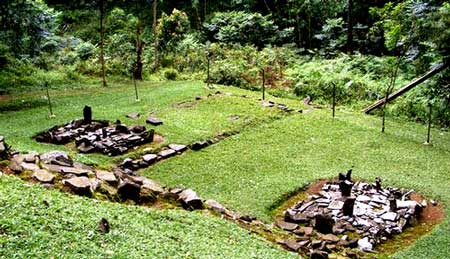 Not all people are aware the presence of Domas Cibalay Prehistoric Site located in Bogor City. It is because tourists only focus on famous vacation especially Bogor Botanical Garden, no? Well, at least, they should visit Domas Cibalay once later. This Indonesia’s statue location is in Tapos I Village and it belongs to Tenjolaya Sub-District. Well, at least they can learn some information and history regarding the site. Also, that place is suitable to conduct photography and take selfies due to the pristine environment and beautiful panorama of the site. In fact, this site resides at the foot of Salak Mountain!

The Nuance
What about the nuance? Once tourists arrive at the site, they may see piles of stones which have been there since the Megalithic Era. In terms of size, the total area of the site is only about 1 hectare. Despite the size, the environment is clean and neat due to a wonderful management is done by the locals. At the gate, visitors may find a signage “Bale Kambang”. It is even said this site was used by Pajajaran royal advisors in creating strategies and conducting meetings!

Exploring Domas Cibalay Prehistoric Site
The official name of the site is Arca Domas, which derives from the Ancient Sunda Language. The meaning is “800 Patung” or 8 hundreds of statues, actually. Despite the name though, no one has counted the exact number of those statues. Here is the most interesting feature of the site. Tourists may find several inscriptions printed on those stones. No one knows the meaning of these words, though. Even historians have no idea about those. One thing that tourists can be sure of is that they can take pictures of them freely!

In the midst of piles of stones, tourists can also find a vertical stone having the shape of a triangle. According to the locals, this stone represents the grandiose Salak Mountain. This majestic object is surrounded by other stones as well. Beside it, another similar stone resides which represents another famous mountain of the region called Pangrangro.

For first-timers, it is better to come to Arca Domas Cibalay Prehistoric Site with a tour guide. It is because the service is able to help them regarding the route and thorough information of the site. The most important rule is that they should avoid littering or causing damages to the site. It is has a historical value, after all. Here is another important thing to pay attention. Tourists should consider wearing hiking footwear as it helps them to explore the site comfortably.

How to Get There
From Jakarta City, a trip to Domas Cibalay Prehistoric Site may take about 2 hours and 10 minutes as the distance is 72.7 km. The first destination is definitely Bogor City. Next, tourists should head to Tenjolaya Sub-District and reach Tapos I Village. Also, it involves a short trekking to get to the site.