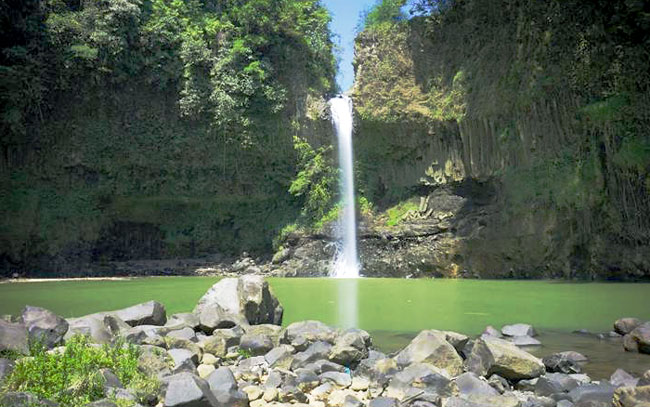 Various options of natural attractions reside in West Java Province. Well, the next recommended tourist site for those who are visiting Bogor city is called Cilontar Waterfall. This beauty is located in Karyasari Village and belongs to Leuwiliang Sub-District. Not only the site offers a mesmerizing nuance, but it also has an interesting mystery for tourists to find out. This explains why the locals consider it a sacred place and apply several prohibitions on site! Even though those rules reduce tourists’ freedom in doing fun things during the visit, those make the site distinct and more popular among other waterfalls.

The Nuance
In terms of nuance, Cilontar Waterfall looks beautiful and serene without a doubt. It is also surrounded by a high cliff, bushes, and several trees. Not to mention a natural pond and river resides near to it, featuring various sizes of stones and rocks. Even though the water looks alluring and fresh, the locals prohibit visitors to get and take a bath in it! The only explanation is that villagers believe it sacred and may cause misfortunes to those who take a bath on site.

Exploring Cilontar Waterfall
As compared to other waterfalls, Cilontar indeed offers a distinct charm. Somehow, it emits a mystical atmosphere which explains why locals consider it a sacred place. Even it is prohibited to get in the water or swim in it! It is said those who break the rules may get misfortunes in the near future. In order to avoid any incidents, villagers even built a signage that tells several prohibitions including swimming and giving an offering to the site. Another important consideration is that visitors are recommended to leave some money on available charity box.

There is an explanation why Cilontar Waterfall is not suitable for swimming or playing water, though. Aside from the curse, another reason is the strong water discharge which is not safe for tourists. Also, the natural pond that resides beneath it is considered quite deep. No wonder, it is not safe for those who want to play water or swim in it. Even the murky water makes it uncomfortable for playing water, no?

So, what can people do there? The most recommended one is photography. That means visitors can explore the site and take some good pictures there. For those who want to play water, they should avoid getting in the natural pond of the waterfall. Instead, they can head to the nearby river and swim there. What is more? Do not forget to learn urban legend and other interesting stories of the site from the locals! As an alternative, tourists can get the information from a tour guide.

How to Get There
For those coming from Jakarta City, their prime destination is Bogor City. Next, they can simply reach Leuwiliang Sub-District and get to Karyasari Village afterward. This whole trip takes approximately about 1 hour and 52 minutes, as the distance is 80.4 km. It can even be faster if they take Jagorawi Freeway.