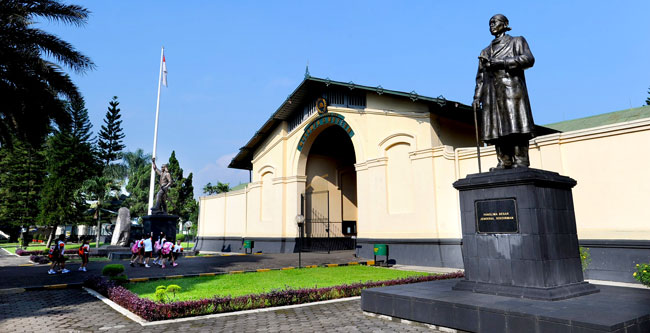 It is a little bit disappointing that several tourists are not aware of the Bogor City’s potential when it comes to history. In order to take care of this problem, travelers should take their time and visit a famous museum called Pembela Tanah Air. Many people also call it Patriot Museum, actually. There is even another name, which is PETA Museum. So, where is the location? It resides in Pabaton Village and belongs to Central Bogor City. What tourists need to do is to reach Jendral Sudirman Street number 35, as the museum resides there.

The Nuance
The museum is located near to Bogor Palace, which is about 700 meters apart. It has a historical value as it has been there since 1745, for sure. In 1943, PETA army used this building as the base to fight Japan (the invader). This army was the seeds of today’s Indonesian National’s Army in fact! The building was inaugurated as a museum and tourist site in 1993 and it stores numerous historical collections related to the struggle of the locals during the colonial era. When it is about ornaments, in front of the museum, a majestic statue of General Sudirman resides beautifully!

Exploring Pembela Tanah Air Museum
It is, without a doubt, tourists visit Pembela Tanah Air Museum in order to see its collections and learn some history related to it. The first allure of the museum is the presence of 14 dioramas telling the story of PETA army’s rebellion against the invader in order to achieve independence of Indonesia. Each of dioramas represents a distinct event of such struggle, so tourists can explore them all comfortably during the visit. In order to get thorough information, it is recommended to hire a local guide.

What is more? The next impressive collection of Pembela Tanah Air Museum is old weapons used in the confrontations back then. These once belonged to the Japanese Army, actually. The thing is that tourists are not able to touch these items, as they are kept inside the showcase. It is common sense as these weapons are quite valuable and hold a significant history. Another important rule for visitors is that they are not allowed to litter or cause too much noise inside!

Another popular activity that tourists often do in Pembela Tanah Air Museum is definitely photography. As for the information, the best background is the statue of General Sudirman located in front of the museum. Everyone should pay attention to the visiting hour, though. It is because the museum doesn’t accept visitors in Saturday and Sunday.

How to Get There
From Jakarta City, tourists may spend a trip about 53 minutes if they want to reach Pembela Tanah Air Museum. It is because the distance is 52.8 km, but it can be faster if they take Jagorawi Freeway. After arriving at Bogor City, they can simply head to Central Bogor Sub-District and visit Pabaton Village right away.