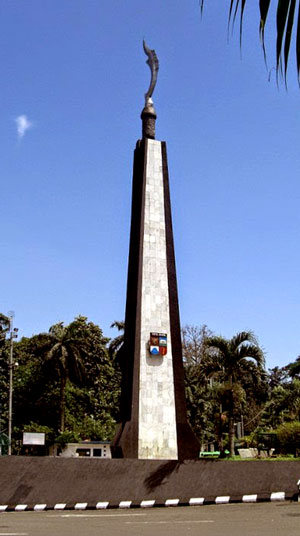 A good vacation always involves a great tourist spot for them to visit. In this case, Kujang Monument can be a good choice for those who visit Indonesia. This landmark is located in Tegallega Village and it belongs to Central Bogor Sub-District. The monument indeed has a nice popularity and it has become a symbol of Bogor City! Not to mention it has a strategic location, which is at the intersection of Otto Iskandardinata and Pajajaran Street. Due to its fame and unique structure, it has become a wonderful object of photography among tourists (especially at night surrounded by lights of the city).

The Nuance
In terms of appearance, the monument has a sharp texture and looks like a regular tower. It resides on a triangle-shaped landscape and located in front of Botani Square. What about the size? It has the height of approximately 25 meters and has the color of white. The thing is that tourists must cross the road if they want to get closer to the monument and take selfies in front of it. As for the tip, it is quite recommended to visit in the evening. It is because the nuance is more serene and the panorama looks more attractive due to the lights of vehicles and buildings. Somehow, the traffic is lower so it becomes safer to get close to the monument.

Exploring Kujang Monument
For tourists, it would be interesting to learn about the history of Kujang Monument first before exploring the site. Despite the young age, built in 1982, it has become a significant city symbol for years. The inauguration was done by Ahmad Sobana (who was the regent back then). According to the locals, in fact, it took even the help of a chopper in order to place the top ornament of the monument. It was due to the height of the structure and the weight of the decoration itself.

The majority of visitors are those who want to take pictures of this structure, without a doubt. Here is the thing. In terms of design, the indonesia’s monument has two parts. The first part has the shape of an obelisk, having a cut on its tip. Another part is the topmost ornament that has the shape of a traditional weapon of Sundanese, which is called Kujang. No wonder, the monument was named after it.

Here is the tip. It is recommended to visit Kujang Monument when the traffic is low, so everyone is able to get near to it without worries. Also, as mentioned earlier, it would be great if tourists visit it at night. Make sure to wear a jacket as the weather becomes cold in the evening, though. Do not forget to carry a camera as well.

How to Get There
From Jakarta City, it takes about 47 minutes to get to Kujang Monument as the distance is 53.1 km. It can even be faster if tourists take Jagorawi Freeway in order to get to the site. Tourists only need to get to East Bogor Sub-District first. The last destination is Tegallega Village, where the monument resides. Though, it is located at the intersection, so be careful when crossing.