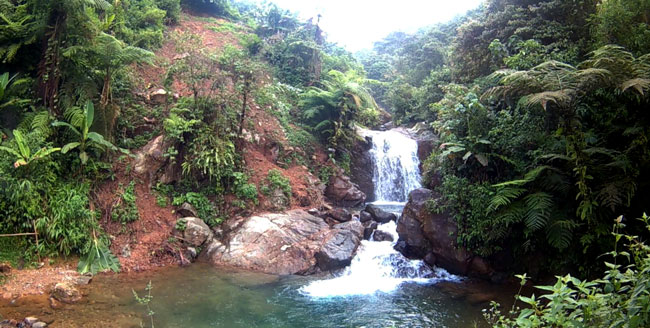 Just because Bogor Grand Park becomes the most popular vacation destination in that region, doesn’t mean it is the only option for tourists to visit during holidays. It is because Bogor also has lots of stunning waterfalls, scattered in different areas. For instance, there is Hordeng Waterfall of Sukamakmur Sub-District. To be exact, the location is in Cibadak Village and it resides near to Pancar Mountain. Not only the waterfall looks beautiful, but it offers a trekking opportunity to everyone. It is because tourists need to pass a challenging route in order to get to the site!

The Nuance
Tourists should be grateful for the nice trekking route as the locals have built a walking path in some parts of the site. That doesn’t mean tourists can walk to the waterfall carelessly, though. It is because the route is steep and winding, which is risky for inexperienced trekkers. Despite the challenge, the site offers an amazing panorama featuring local farms and hills! Once arriving at the location, they may find a moderate-size waterfall with its strong water discharge. It is surrounded by bushes and trees, as well. Plus, there is a small pond beneath it.

Exploring Hordeng Waterfall
The adventure starts from the entrance of the site after paying the ticket and parking fee. Here is the thing. From the entrance, tourists need to pass through laterite which becomes slippery during the rainy season. Thus, make sure to come during a good weather only! Once taking care of the first challenge, tourists need to spend some stamina and conduct a short trekking to get to the waterfall. Despite the tiredness, tourists would be able to enjoy beautiful panorama including valleys, coffee plantation, etc. Thus, don’t forget to take some pictures using a camera before continuing the trip.

Once arriving at the site, tourists may see a stunning waterfall directly. The height is only 10 meters, but it has a mesmerizing beauty. When it comes to the appearance, it has a unique shape and wide figure. Somehow, it looks like a curtain (which represents the name of it). “Hordeng” means a drape, after all. Here is the tip. Tourists should carry a hammock and install it above the natural pond between trees. This is the best way to relax and enjoy the nuance on the site, for sure.

Another recommended activity that tourists should do when visiting Hordeng Waterfall is none other than taking a bath in the natural pond. It is because the water is quite refreshing and the nuance is peaceful. In this case, do not forget to carry extra clothes and always avoid littering!

How to Get There
For those coming from Jakarta City, they may spend a trip for about 1 hour and 40 minutes to get to Hordeng Waterfall. Their first destination is Bogor City. Next, they can take any local transportation service and head to Sukamakmur Sub-District. The last thing to do is to reach Cibadak Village and conduct trekking to the waterfall right away. The whole trip takes approximately 1 hour and 40 minutes, as the distance is 58.4 km. Also, make sure to take Jagorawi Freeway for a faster trip.